The Board of Besra Gold Inc (ASX : BEZ) (“Besra” or “Company”) is pleased to provide this maiden Quarterly Activities Report following its listing on ASX on 8 October  2021.

“Besra has made exceptional progress in becoming fully operational at Bau during the December 2021 Quarter. We have established a functional office in the Bau township, and our team has mobilised the logistical support that allowed drilling to commence in early November. Drilling has progressed well, thanks to our professional technical team, community support and effective COVID policies. Visual inspection of the drill core from Jugan is consistent the pre-drill expectations of sulphide mineralisation. We look forward to reporting the initial results which are due imminently.

The Bau Gold Project is located 30 – 40km from Kuching, the capital city of the State of Sarawak, Malaysia, on the island of Borneo (Figure 1).

Besra controls, directly and indirectly, a 97.8% interest (92.8% on an equity adjusted basis) in the Bau Gold Project. This project lies at the western end of the arcuate metalliferous belt extending through the island of Borneo. In Kalimantan (the Indonesian jurisdiction portion of Borneo), this belt is associated with significant gold mining areas including Kelian (7Moz) and Mt Muro (3Moz). 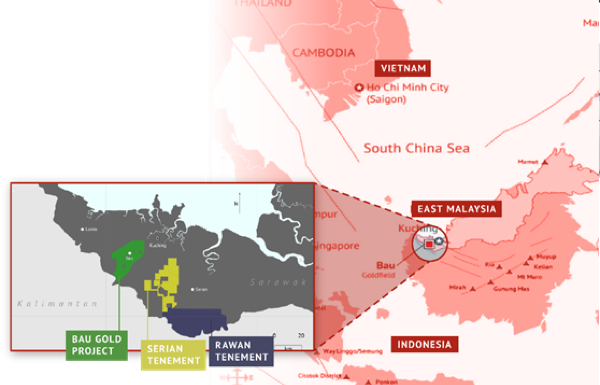 corridor, centred on the township of Bau. The Company has identified total mineral resources estimated at 72.6Mt @ 1.4 g/t for 3.3 million ounces of gold across a number of deposits (Table 1) and has an Exploration Target ranging between 4.9 and 9.3Moz3 (on a 100% basis). The project is well serviced by first class infrastructure including access to deep water ports, international airport, grid power, communications, and a multitude of service providers.

During the December 2021 Quarter Besra successfully negotiated drilling, technical and logistical support contracts as well as completed land access arrangements, to commence drilling at the Bau Gold Project.  Drillcorp Malaysia Sdn Bhd was contracted to provide two rigs to undertake diamond hole drilling.  This program, of between 3,000m – 4,000m, is the first drilling conducted at the Bau Gold Project since 2017-2018.

Drilling commenced at the Jugan Project, located approximately 6 km NE of Bau township (Figure 2). Jugan is the most advanced of the projects at the Bau Gold Project, having a JORC Resource of: 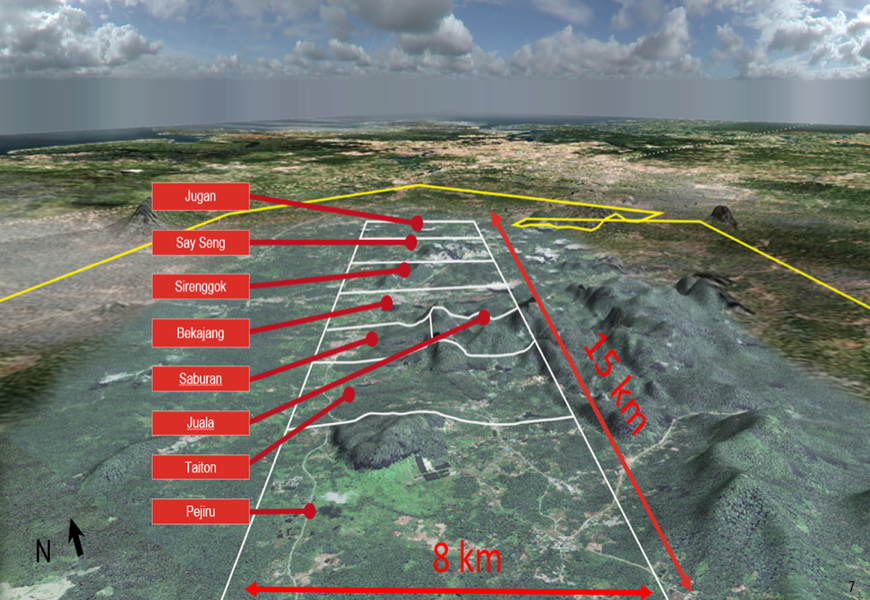 Figure 2 – Location of deposits along the Bau goldfield corridor

In total 11 holes will be fully cored for a total of approximately 1,100 m of drilling (Table 2) designed to provide in-fill and step-out control within the shallow crestal portion of the Jugan mineralised zone. As at the end of the December 2021 Quarter seven holes had been completed, with logging and sampling completed on five (Figure 3).  During December 2021 samples for drill holes JUDDH 82, 83, 84, & 85 were despatched to SGS’s laboratories in Pt Klang Malaysia for assay analysis.  The assay results are imminent.

Although the area is easily assessable, the specific locations of each drill pad have required access ways, culverts and lay-out areas to be prepared (Figure 3). The location of the drill hole program at Jugan is shown on Figure 4 and the specifications of each hole are tabulated in Table 2. 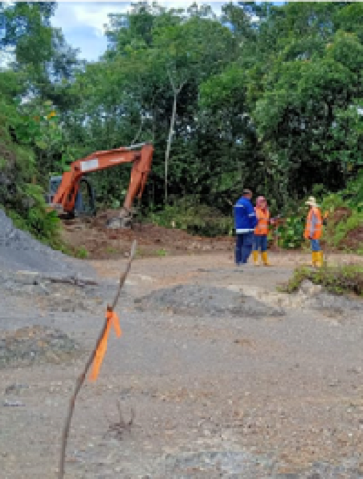 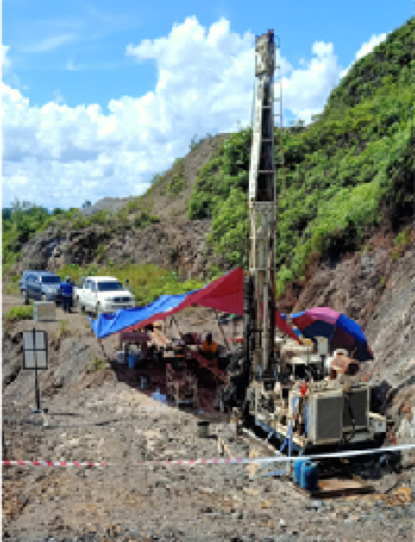 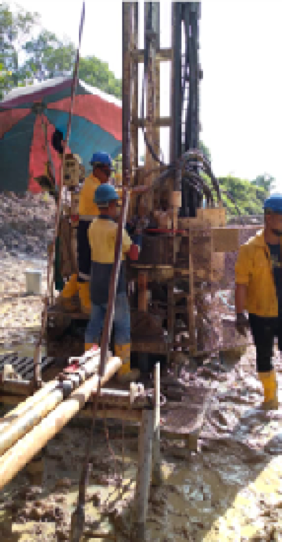 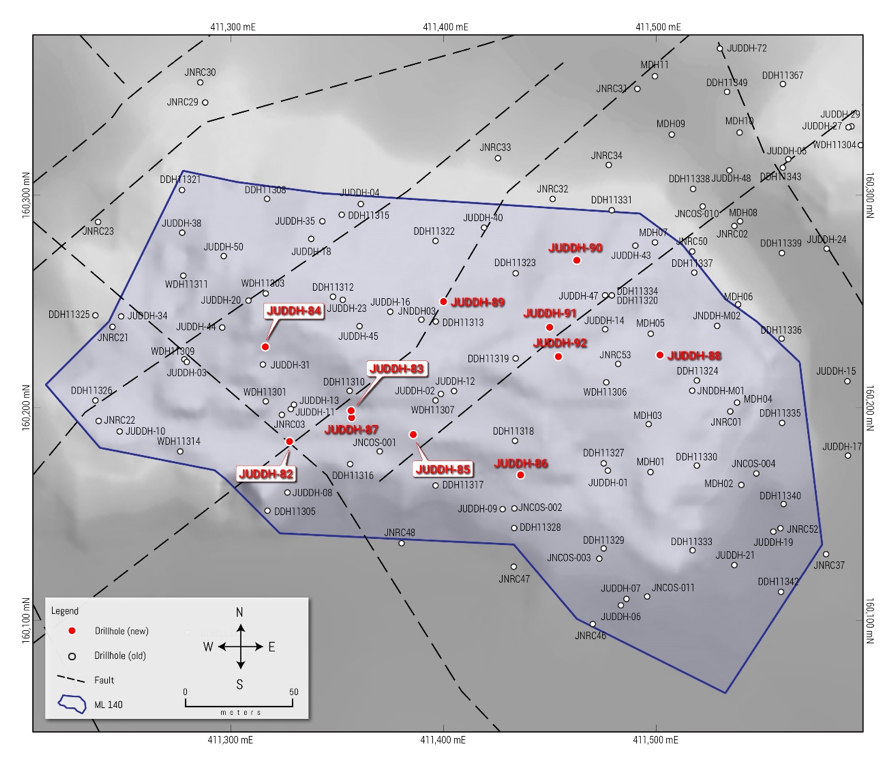 Visual sulphide mineralisation has been observed in core recovered from all holes. The sulphides at Jugan are dominated by arsenopyrite with subordinate pyrite, either as highly disseminated fine grain occurrences mostly within shale shales or more concentrated occurrences associated within veining, stockworks, sand laminations and occasional breccia (Figure 5).

Because of its refractory style, gold mineralisation is normally correlated with the presence of sulphides and visible gold in core is very rare.

The occurrences of sulphide mineralisation at Jugan are consistent with pre-drill expectations.

During the Quarter, Chemsian Konsultant Sdn Bhd was mandated to undertake an Environmental Impact Assessment of the Jugan Project, an area of approximately 300 hectares, encompassing MLs 140 and 1/2013/1D. This EIA is a process of evaluating the likely environmental impacts associated with a future proposed development proposal of the Jugan Project involving mining and processing. The EIA will be used for decision-making purposes by the Natural Resources and Environment Board of Sarawak and other relevant agencies.

During the Quarter, Chemsian Konsultant Sdn Bhd was mandated to undertake an Environmental Impact Assessment of the Jugan Project, an area of approximately 300 hectares, encompassing MLs 140 and 1/2013/1D. This EIA is a process of evaluating the likely environmental impacts associated with a future proposed development proposal of the Jugan Project involving mining and processing. The EIA will be used for decision-making purposes by the Natural Resources and Environment Board of Sarawak and other relevant agencies.

Drilling is scheduled to commence at Pejiru at the completion of the drilling program at Jugan and will target extensions to the Pejiru Mineral Resource which has already been delineated:

Previous drilling intercepts to be followed up included:

Besra has rapidly established its operational centre in the township of Bau including upgrading the office and living quarters and communications. New core and sample shed facilities have been constructed (Figure 7).

Technical and logistical support for the drilling operations has been contracted to Geoimpact Resources. Geoimpact include a group of very experienced geologists and operational specialists several of whom had previously worked at Bau with Besra and with the drilling contractors Drillcorp Sdn Bhd. Overall supervision is provided by Kevin Wright, Project Manager.

During the Quarter the Company met with community leaders, landowners, and other stakeholders at Bau (Figure 6) to discuss forecast exploration plans, project management, access needs and the implementation of COVID public health care protocols for employees and contractors consistent with national and state government regulations. 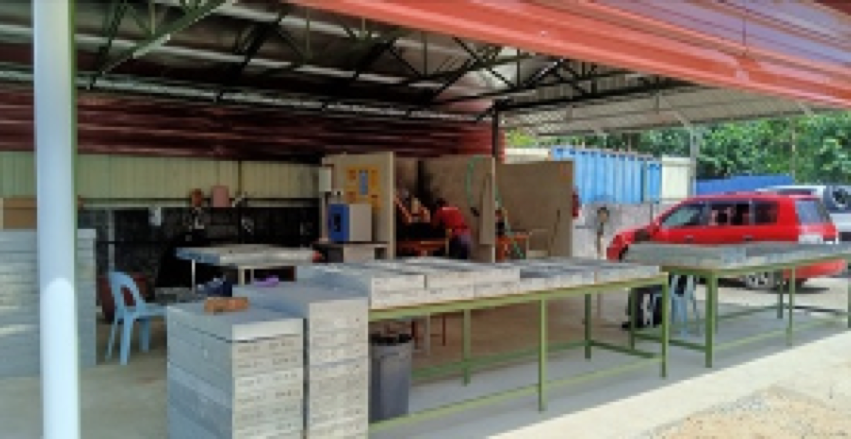 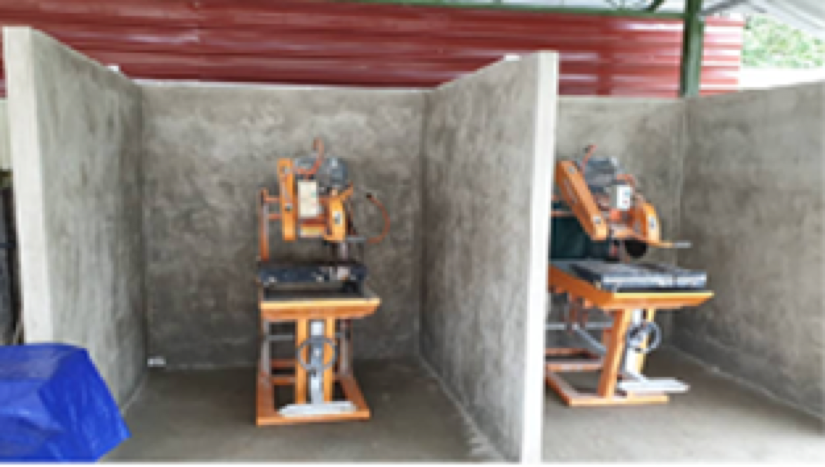 On 22 April 2021 the Company filed a prospectus (“Original Prospectus”) with the Australian Securities and Investment Commission (“ASIC”) that would restructure the Company’s financial position through an initial public offering (“IPO”) of the Company’s common shares in the form of Chess Depository Receipts (“CDIs”) on the ASX.

The Company received Conditional Admission approval from the ASX on 24 September 2021 and was admitted to the Official List of the ASX on 6 October 2021, and its securities (in the form of CDI’s) quoted and commenced trading on 8 October 2021.

Proceeds from the IPO were recorded as ‘restricted cash’ at 30 September 2021 and became available to use upon admission to the ASX on 8 October 2021.

Having listed in October 2021, the Company was not required to file quarterly reports for the quarter ended 30 September 2021. The Company’s unaudited Condensed Interim Consolidated Financial Statements and Management Discussion and Analysis for the quarter ended 30 September 2021, prepared in accordance with Canadian reporting requirements, were filed on 1 November 2021 at www.sedar.com and are available on the Company’s website. Future quarterly reports will be filed with ASX.

In December 2021, the Company issued a notice for its Annual General and Special Shareholder Meeting held on 7 January 2022. All Resolutions put to that Meeting were passed.

[6] Refer the Prospectus for full details

Besra is in a consortium with a Malaysian group with Bumiputra interests that owns rights to consolidated mining tenements covering much of the historic Bau goldfield in Sarawak, East Malaysia. Besra’s interests in the Bau Gold Project are held through its direct and indirect interests in North Borneo Gold Sdn Bhd (“NBG”). Besra’s 100% owned subsidiary – Besra Labuan Ltd (“Besra Labuan”)- acquired its interest in NBG, which owns rights to the mining tenements covering the area of Bau in accordance with the agreement for the sale of shares in NBG between Gladioli, Besra Labuan and Mr. Ling Lee Soon (guarantor of Gladioli) dated 1 October 2010, as amended, and restated on 12 May 2013 and 17 November 2016 (“SPSA”).

Under the terms of the SPSA Besra was required to pay a further US$7.6 million consideration to Gladioli to acquire the remaining shares in NBG. In March 2021, in consideration of the issue to Gladioli of 12.5 million Besra CDIs, Gladioli, Besra and Besra Labuan agreed to a further amendment of the SPSA and to release Besra and Besra Labuan of their obligations to complete the purchase of the remaining shares in NBG (“SPSA Variation”).

In accordance with obligations contained in ASX Listing Rule 5.3.4, Besra provides the following information with respect to its Use of Funds Statement as set out in its Prospectus and its actual expenditure since ASX admission. [7]

As disclosed in the Prospectus the Company had limited cash reserves prior to the Listing. Delays to the completion of the Company’s IPO resulted in transaction costs associated with the Listing being higher than estimated. In order to support the preparation of the Original Prospectus, Replacement Prospectus and Supplementary Prospectus and meet general working capital requirements prior to Listing, the Company entered into a number of short-term working capital loans on arm’s length terms and conditions. Those loans were repaid from the proceeds from the IPO.

ASX Listing Rule 5.3.5 Disclosure – Payments to related parties during the quarter as outlined in sections 6.1 and 6.2 of the Appendix 5B consisted of the following:

The information in this Announcement that relates to Exploration Results, Mineral Resources or Ore Reserves is based on information compiled by Mr. Kevin J. Wright, a Competent Person who is a Fellow of the Institute of Materials, Minerals and Mining (FIMMM), a Chartered Engineer (C.Eng), and a Chartered Environmentalist (C.Env). Mr. Wright is a consultant to Besra. Mr. Wright has sufficient experience which is relevant to the style of mineralisation and type of deposit under consideration and to the activity which he is undertaking to qualify as a Competent Person as defined in the JORC Code (2012 Edition) of the Australasian Code for Reporting of Exploration Results, and a Qualified Person as defined in National Instrument 43-101 Standards of Disclosure for Mineral Projects of the Canadian Securities Administrators.

Kevin J. Wright consents to the inclusion in this Announcement of the matters based on his information in the form and context that it appears.

The information in this announcement is based on the following publicly available announcements previously lodged on the SEDAR platform: