Early Commencement Works application lodged at the same time was approved by the NREB on 21 December 2022. This will enable activities to be undertaken prior to a determination of the EIA.

The Board of Besra Gold Inc (ASX: BEZ) (Besra or Company) is pleased to make this announcement.

The Capital Structure of Besra, shown in the table below, represents that following the issue of new CDIs following the Entitlement Offer on 3 January 2023.

Updating the disclosure made on 25 November 2022, the Company continues to advance its discussions with its substantial shareholder, Quantum Metal Recovery Inc, pursuant to which it is proposed that it will provide up to US$300 million in financial support, commencing as soon as CY2023, by way of a gold offtake purchase facility. The proposed facility, if implemented, would enable Besra to advance exploration and development planning, and to expedite production at the Bau Gold Project in Sarawak, Malaysia.

It is currently proposed that stream deliveries would be based on gold production from Bau, with Besra to receive 90% of the spot gold price for each ounce delivered subject to a monthly cap.

Potential to draw-down tranches to progressively fund procurement, construction, and commissioning of onsite mine & processing plant. Negotiations are progressing positively, although no agreement has yet been reached, and any agreement would be subject to Besra board, shareholder and regulatory approval including compliance with ASX listing rules.

The Company remains frustrated with the poor turn-around of assaying for its core samples.

During much of the December quarter drilling was suspended until the backlogged assay results were received and integrated into the forward program planning.  The assay results for DKBBH-28, -29 & -30 remain pending, however, the balance of received gold assays are listed in the above table following the drilling of 21 fully cored holes totalling 1400 m of drilling.

The best gold intercepts were associated with the traditional shallow target zone near the Bau Limestone upper contact with overlying sequences, most notably the Pedawan Shale (Limestone-Shale Contact or LSC) along the northern flank of the historic Bekajang tailings dam (Figure 1). However, BKDDH-27 encountered bonanza grade gold mineralisation in a deeper level of the Bau Limestone, quite discrete from the LSC highlighting the potential for a new deeper Bau Limestone mineralisation target.

The bonanza high grade gold intercepts at Bekajang, within the Bau Limestone, now constitute a second primary objective of the 2023 Bekajang drilling program which has just commenced with the drilling of BKDDH-31.

The first phase of this new program will involve drilling six fully cored drill holes, effectively as directional step-outs from the BKDDH-27 hole, (which encountered the deeper bonanza grade gold intercepts within the Bau Limestone), to determine the lateral extent and attitude of this deeper mineralised zone.  It is speculated that this may be mineralisation within a sub-vertical conduit system providing the pathway for the preferential flow of mineral-charged hydrothermal fluids upwards into the overlying LSC zone.

The second phase will involve deeper reconnaissance, “proof of concept” drilling to determine whether the deeper Bau Limestone mineralisation could be a pathfinder; part of a more extensive conduit system related to an intrusive complex and its heat source that is interpreted to be present beneath the Bekajang tailings dam on the basis of the DIGHEM anomaly interpretation (Figure 2). 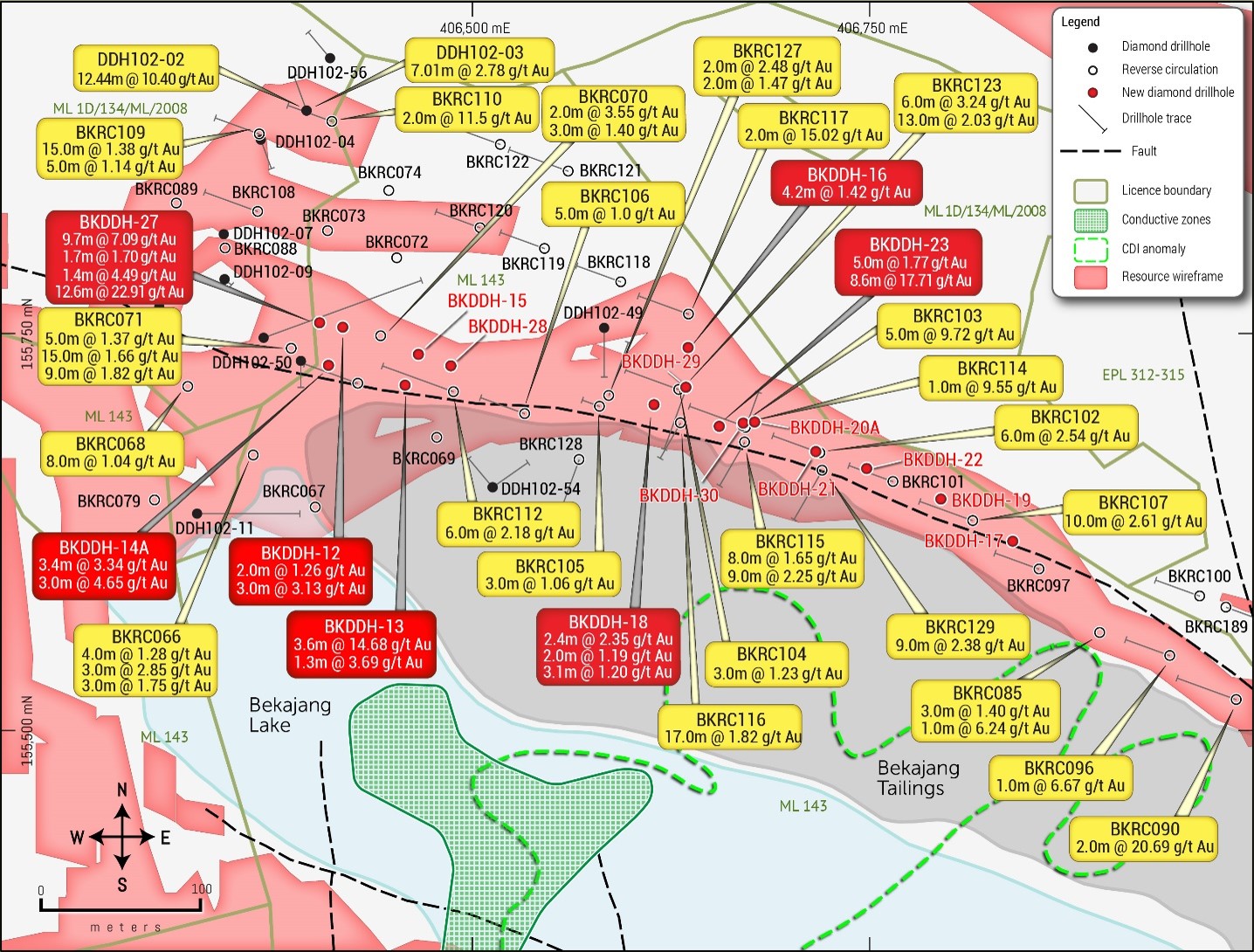 Figure 1: Significant drillhole intercepts and Resource wireframe (in puce) located along the northern flank of the Bekajang tailings dam. Based on geophysical DIGHEM data, the footprint of an interpreted underlying intrusive is shown in green.

In early December 2022, Chemsain Konsultant Sdn Bhd completed community and other stakeholder dialogue meetings and finalised the EIA Report that it had been commissioned to prepare on behalf of the Company. In December 2022 the final report entitled “Proposed Test Gold Mining and Processing at Jugan (ML 01/2013/1D and ML/05/2012/1D), Bau, Sarawak” was submitted in the Natural Resources and Environment Board (NREB) Sarawak in conformity with the initial Terms of Reference for the Project. The project activities include land access / compensation agreements, test plant engineering, procurement, and construction management (EPCM), engagement of mining contractors, site construction & earthworks, construction phase, test pit construction & plant commissioning, operational, bulk sampling & processing, and lastly rehabilitation & decommissioning.

At the same time an Application for Early Commencement Works (ECW) was lodged to undertake drilling activities prior to a determination of the EIA.  This ECW was approved, by the NREB on 21 December 2022 within the area effected by the EIA.

Figure 2:  The conceptual model based on the intersection of a sub-vertical feeder system by BKDDH-27 also provides a possible explanation for the occurrence of locally enhanced mineralisation at the LSC level, such as encountered in both BKDDH-23 & -27.

The Joint Venture has decided to allow ML 1D/136/ML/2008 to lapse at the conclusion of its 20-year term, given that it is extensively impacted by the subsequent gazettal of the Dered Krian National Park (Figure 3) and does not form part of the Joint Venture’s core activities. As previously disclosed the Joint Venture had been advised by the Ministry of Urban Development and Natural Resources in 2018 of its intention to revoke four Mining Leases within the Bau Gold Project, totalling 252.4Ha. These four Mining Leases variously encroach upon the newly gazetted boundaries of the DKNP.

The Joint Venture will continue to advance its position and will consider full or partial renewals as appropriate for the other three MLs in due course.

This ML has not been core to the Joint Venture’s activities and no direct work has been undertaken in it for more than a decade.  Its expiry will result in an impairment in the Resource Inventory estimated at 263,800 Oz. 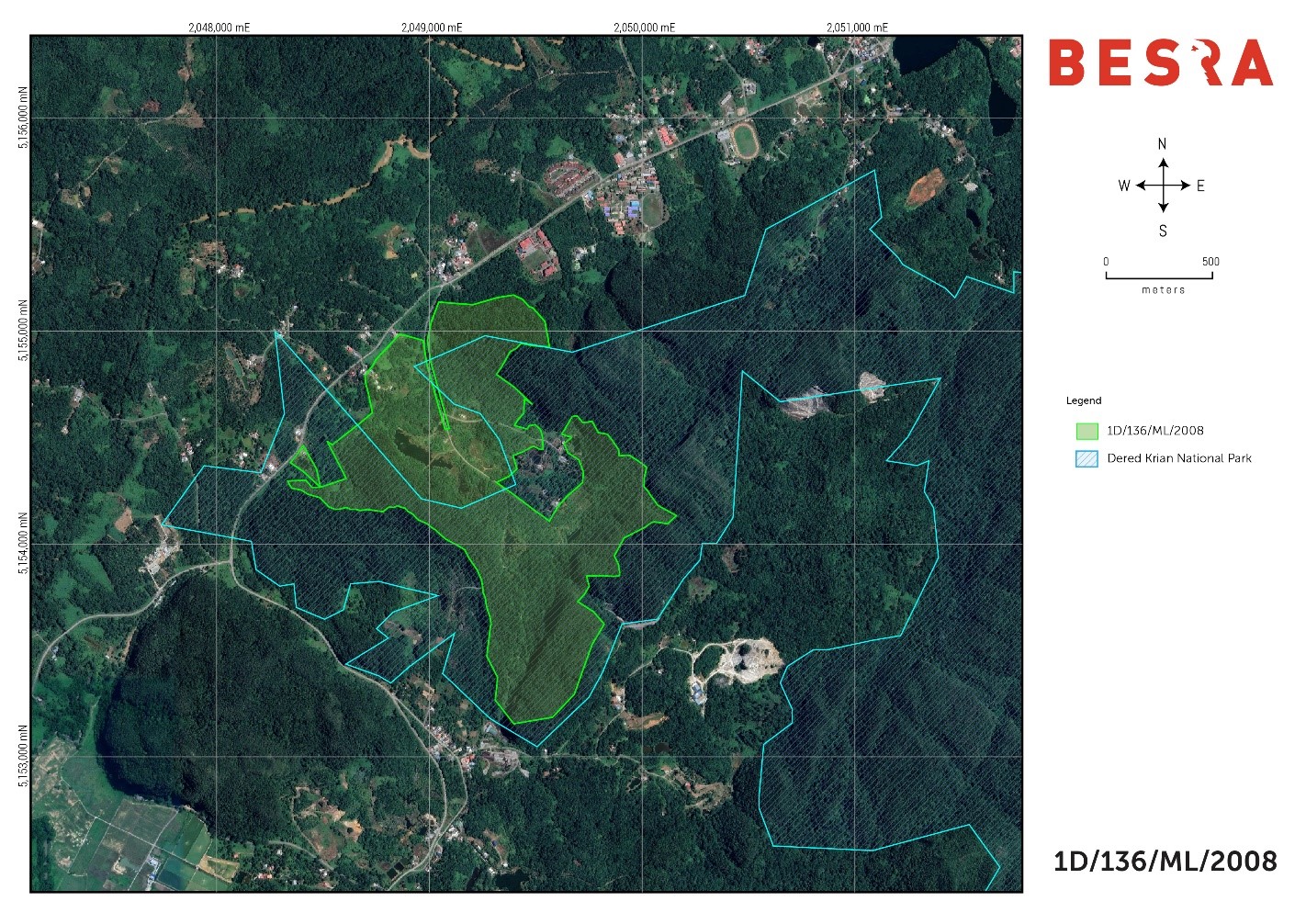 Figure 3- location of ML 1D/136/ML/2008 (yellow) within the outline of the Dered Krian National Park boundaries (in blue).

This ASX release was authorised by the Board of Besra Gold Inc.

The information in this Announcement that relates to Exploration Results, Mineral Resources or Ore Reserves is based on information compiled by Mr. Kevin J. Wright, a Competent Person who is a Fellow of the Institute of Materials, Minerals and Mining (FIMMM), a Chartered Engineer (C.Eng), and a Chartered Environmentalist (C.Env). Mr. Wright is a consultant to Besra. Mr. Wright has sufficient experience which is relevant to the style of mineralisation and type of deposit under consideration and to the activity which he is undertaking to qualify as a Competent Person as defined in the JORC Code (2012 Edition) of the Australasian Code for Reporting of Exploration Results, and a Qualified Person as defined in National Instrument 43-101 Standards of Disclosure for Mineral Projects of the Canadian Securities Administrators.

Kevin J. Wright consents to the inclusion in this Announcement of the matters based on his information in the form and context that it appears.

Besra is in a consortium with a Malaysian group with Bumiputra interests that owns rights to consolidated mining tenements covering much of the historic Bau goldfield in Sarawak, East Malaysia. Besra’s interests in the Bau Gold Project are held through its direct and indirect interests in North Borneo Gold Sdn Bhd (“NBG”). Besra’s 100% owned subsidiary – Besra Labuan Ltd (“Besra Labuan”)- acquired its interest in NBG, which owns rights to the mining tenements covering the area of Bau in accordance with various agreements the sale of shares as a result of which Besra’s interests in NBG increased to 97.8% and its equity adjusted interest increased to 92.8%.

As outlined in the Prospectus and in the Entitlement Offer Booklet the joint venture has been advised by the regulator of its intention to revoke four mining leases within the Bau Gold Project, which encroach upon the boundaries of the Dered Krian National Park (DKNP). The joint venture submitted a proposal in August 2018 seeking to voluntarily surrender those portions of the mining leases which encroach upon DKNP in return for retaining the remaining portions of the mining leases or reapplying for new mining leases over those remaining portions.

To date those discussions have not resolved these issues and if ultimately unsuccessful the Company may not have an interest in, or beneficial title to, the necessary permits to fully exploit the intellectual and geological knowledge of previous exploration results. Should the land within the DKNP be surrendered, the Bau Gold Project’s global Resource would be reduced from 3.3Moz to approximately 3.02Moz of Mineral Resources. Alternatively, if the four mining leases are revoked in their entirety, the Project’s global Resource will be reduced to approximately 2.6Moz. The Company believes this to be the more unlikely outcome because it would reapply for appropriate tenure over those lands within the four mining leases not lying within the DKNP. The Company has no reason to believe that any forfeiture has been registered in relation to those mining leases. Nevertheless, should forfeiture be effected it will not impact upon the Company’s business strategy.

The information in this announcement is based on the following publicly available announcements previously lodged on the SEDAR Company Information Besra Gold Inc platform or on Besra’s website.